THE VALLE D’ITRIA – A SEA OF TRULLI AND CAVES 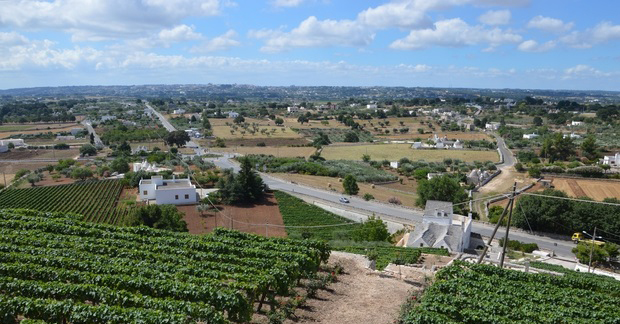 It is a karst depression situated among the territories of Alberobello, Locorotondo, Martina Franca and Cisternino, with the northern edge in CastellanaGrotte and the southern edge in Ceglie Messapica. Scattered with trulli, it is divided into thousands of small sections of land cultivated with orchards, vineyards and olive groves, with characteristic dry stone walls grayed by the oxidation of the limestone. Once covered with woods of fragno trees and downy oaks, today it can be seen in small scraps of land near the most important and active farms.

It was formed in the last millennia as a result of the collapse of the underground cavities of the lower Murgia, almost at the limit of the “slope” that separates it from the plain of centuries-old olive trees of Monopoli and Fasano, towards the coast. The caves that still dot the territory and are known only where surface openings have been found, formed as a result of the washout of rainwater, which chemically “dissolved” the limestone of the rock. Therefore, the voids caused the overlying soil to collapse, lowering the surface level.

Therefore depressions (lame, doline and polje) formed, and together they formed the larger Valle D’Itria. The name derives from the “Madonna dell’Odegitria“, a cult of Byzantine origin. The most evocative landscape can be viewed from the historic centers of Locorotondo and Martina Franca, overlooking it with long belvedere: that of Locorotondo is universally defined “seafront“, because, in the evening, the lights of the trulli scattered in the valley seem like a myriad of boats in a calm sea.

The same process also affected the Canale di Pirro (or “delle Pile”), between Alberobello and Fasano, where the soil drops by over 100min an area of just 1×10 km between Putignano and Selva di Fasano, forming two sharp steep slopes on the northern and south sides,still wooded today.

Over time, the sides, with slopes up to 30%, presented spontaneous formation of paths, furrowed first by wild animals and by the rain that slides on rocks and clayey red soil, and today by mountain bikes. Here the bike tracks can be more or less demanding, with technical difficulties suitable for crosscoutry competitions (XC and XCO). The most beautiful stretches of the route are those that intersect the main channel of the Apulian aqueduct, which lies on the southern side. Some also pass under the characteristic stone bridges.

Under the feet (and wheels) of bikers in the Canale di Pirro lays the deepest cave in Puglia, the Grave Rotolo – Abisso Boscia: it takes its name from its extraordinary depth, well over 324 m vertically. The bottom has not yet been found, because it is submerged by groundwater, which is more than 30 meters below sea level.

It is assumed that this huge cavity, with numerous horizontal intersections, communicates with the best known complex of monumental caves, that of Castellana Grotte, a few kilometers to the north-west. Unlike that, the Grave Rotolo cannot be visited by tourists, especially since the first section is an overhang of about 70 m in height and only very prepared speleologists can tackle the entire descent, which lasts more than a day and also requires diving equipment.