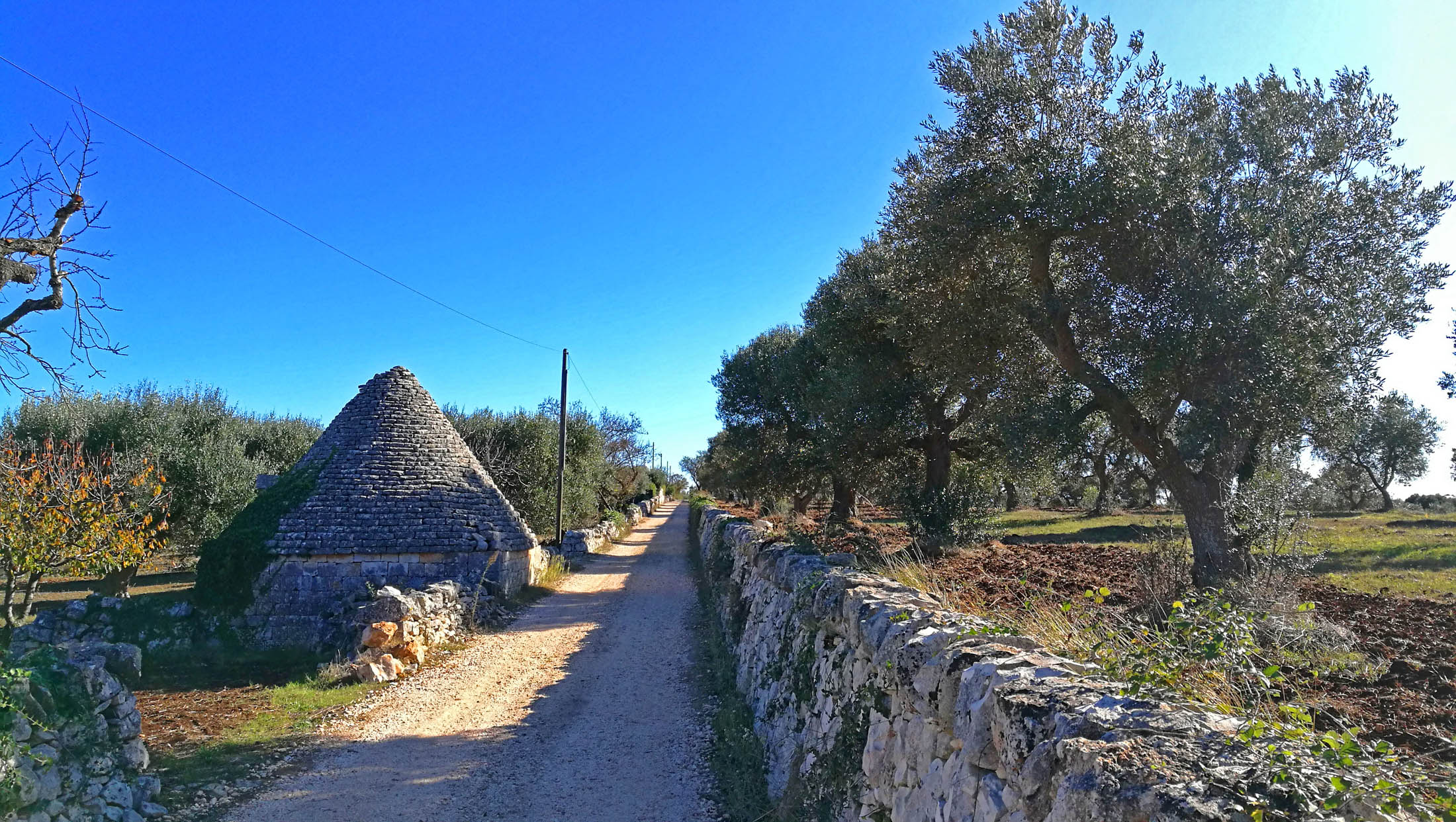 Cycle tourism and e-bike excursions in the Valle d’Itria

The Valle d’Itria is the toponym that identifies the portion of territory between the three provinces of Taranto, Brindisi and Bari. It originates because of the depression of the karst soil and includes the suggestive urban centers of Martina Franca, Alberobello, Locorotondo and Cisternino. Its outskirts extend up to Noci and Ceglie Messapica. Once covered with woods, today it is an excellent example of an agricultural microcosm with strong wine and food traditions.

The pedal assisted mountain bike (also called e-bike or e-MTB) is the ideal way to move among the paths, the cart tracks and the dirt country roads of the Valle d’Itria. Paved roads with no cars often leave space at the brecciated base bordered by the characteristic, typically grayed, dry-stone limestone walls.

Without effort, in a few hours, one can cover a few tens of km to see suggestive views, riding among woods of fragno trees and downy oaks, fields planted with vineyards or fruit trees (olive, cherry, almond trees), as well as cultivated land of wheat and oats or forage. Constantly spotting small trulli here and there, historically used as temporary shelters and deposits for fields work.

The more savvy will appreciate the more “technical” trails and even those with no MTB experience will appreciate the safety given by these bicycles with large wheels (width 2.80) and double suspensions (150 mm of travel). The electric motor gives a barely perceptible power supply and with its adjustable aid intensity, allows each biker to choose the extent of their physical effort during the ride.

It is advisable to be guided by specialized personnel (there are several operators who give this service in Noci, Alberobello, Locorotondo and Martina Franca), because the paths are poorly marked and the land and slopes are variable; without the right assistance there is a risk to cross a freeway, to end up in dense woods, or unpaved paths.

In the territories of Noci and Alberobello, which are about 10 km apart from each other, there are numerous attractions scattered in the countryside or concentrated in small and charming historic centers. These include the imposing “Red House” near Monte Carello, originally an agricultural school, then requisitioned by the Fascist government and used as an internment camp for Jews and enemies of the regime during the Second World War.

Alberobello is one of the most popular destinations in Puglia, a UNESCO site since 1996, featuring over 1,500 trulli in the two main districts “Monti” and “Aia Piccola”, as well as other nineteenth-twentieth-century monuments. It was established starting from the seventeenth century thanks to a sort of conurbation between small clusters of trulli around individual courtyards, also called farmyards, where community life took place – wheat was worked there, farm animals grazed there, bread was made in small “neighborhood” bakeries. Today there are still these small agglomerations of Trulli, in the countryside, more often they have become real “contrade“, only Locorotondo has 138: it is the characteristic of the Itria Valley, being an inhabited countryside.

The territory of Alberobello is also crossed by the Main Canal of the Apulian Aqueduct (AQP), the one that is called the Aqueduct Cycle Route in the territories of Cisternino and Martina Franca. In Alberobello it still presents itself as a dirty road service, untouched since the early 1900s when the drinking water of the Sele (Avellino) reached the lower Murgia Pugliese, tormented by frequent periods of drought.

Here the path of the AQP and its canal-bridges overlook the valley of the Canale di Pirro (legendarily and erroneously associated with the King of Epirus who, according to some, crossed it with elephants during the Taranto campaign). It actually is the “Canale delle Pile”, rainwater cisterns that naturally flow into the karst cavities of the subsoil. A recent discovery in this valley is the Grave Rotolo, the deepest cave system in the region.

The hills here slope down to the valley floor allowing the more sporty bikers to jump downhill or climb the more technical off-road routes in the Itria Valley. Even the Oasi del Bosco Selva, south of Alberobello, offers 60 hectares of public park equipped with trekking routes and play areas for children, easily crossed by e-MTB.

Between Alberobello and Noci there are significant viewpoints on the landscape of Oasis of Barsento, in correspondence with the abbey of Santa Maria di Barsento and the Curcio district, respectively to the north and to the south. The gaze reaches the edge of the Murgian slope towards the Ionic arch that surrounds the city of Taranto.

Moving from Noci it is easy to find an ancient farm still in activity or grazing animals (horses, donkeys, pigs, as well as calves and dairy cows). While arriving in Alberobello it is a must to cross the historic districts of the urban trulli and look for the best views from the lookout spots: very crowded between May and September, it is ideal to visit it in the autumn months and before the Easter holidays.

By choosing Alberobello as a “base camp” accomodation, perhaps staying in one of the many ancient trulli restored with traditional techniques and materials, it is possible to plan several excursions in different days for about 30 km a day. The numerous country lanes allow pleasant circular routes towards Noci, or Martina Franca – Locorotondo or towards the seaside coast of Monopoli and Fasano, passing through the Selva (beyond the aforementioned Canale di Pirro): a three-day stay allows you to visit the most beautiful places in the area, before leaving for Lecce or Matera.

A medium-long excursion, of about 60 km, allows you to ride within a day even the already accessible stretch of the Aqueduct Cycle Route, starting from Alberobello. It is worth it.

In summary, whether you are looking for relaxation and good food, or for outdoor sports, the Valle d’Itria will not disappoint, with its wide spectrum of landscapes, services and activities, often out of the ordinary and banality of mass tourism.