THE LONG PATRONAL FESTIVAL: BETWEEN RELIGION AND FOLKLORE 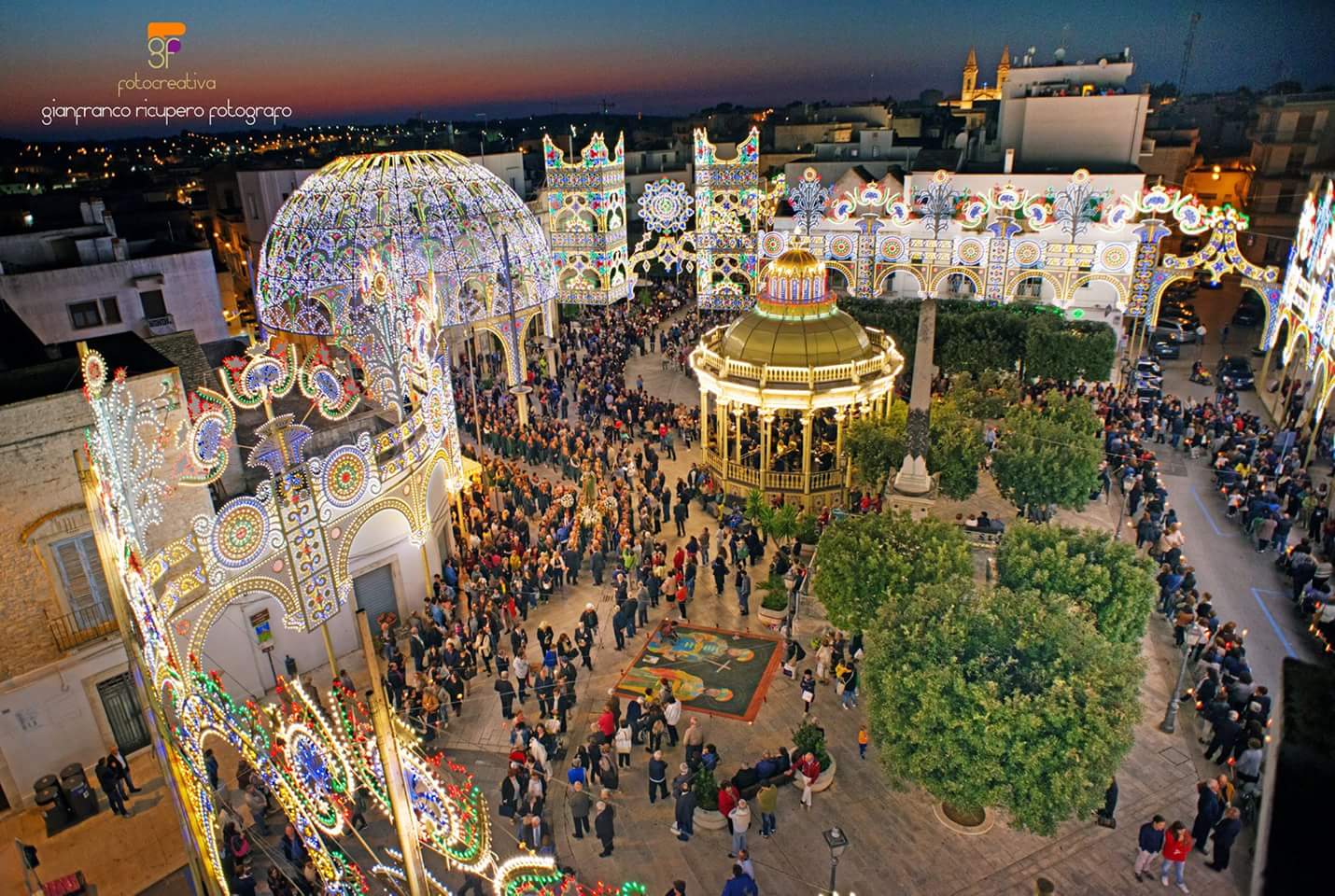 The biggest village festival in Alberobello is that of the patron saints, the doctors Cosma and Damiano. The cult refers to two Roman brothers who lived between Turkey and Syria and who, according to tradition, were in the first generation of martyrs under the empire of Diocletian, at the beginning of the fourth century after Christ.

The veneration in Alberobello is due to the Count of Conversano Giangirolamo II Acquaviva and the first anniversary took place on 27th September 1636. Since then, the religious and civil patronal feast takes place between 26th and 28th September each year, preceded by the cattle and utensils fair of the day 25th.

It is a very heartfelt event, not only in the town but also in the neighboring centers. The devotion to the Saints Medici attracts many pilgrims who traditionally walk to the Basilica at the first light of dawn on the 27th and 28th, moving from their respective residences. Between days 26th and 27th the younger people celebrate “the night“, that is they spend the night walking around until the first mass at 4:00 and then have breakfast and return home: the amusement park of traveling shows and rides is interrupted at midnight and in the four hours the young crowds entertain themselves in small groups of friends.

The whole town center dresses up with the characteristic lights, wooden decorations artistically adorned with small colored light bulbs, often opening with a show of lights and music on the evening of the first lighting. Carousels used to fill Largo Martellotta, and loud music echoed throughout the center up to the Basilica, where it gave way to prayers, amplified by external megaphones.

The feast is synonymous with crowding, especially after the procession that carries the Statues of the Saints around the town: teams of devotees – called bearers – take turns to carry the simulacra on their shoulders. Damiano is the youngest of the brothers and traditionally has to leave the Basilica first, anticipating his older brother Cosma, otherwise, legend has it, the effigies would become heavy and the bearers would not be able to move.

The morning of the religious celebrations, and at the start of the procession, shots of fireworks are fired in the sky of Alberobello, it is the “Diana” which announces the solemn celebration. In the Piazza del Popolo, in front of the Town Hall, a wooden and illuminated sound box hosts the marching band and it is customary to play Verdi’s Aida among other arias.

The show of fireworks closes the feast and everyone moves from the center to the suburbs to admire them just before midnight.

In the hearts of the Alberobellesi, the feast recalls many small moments of conviviality and warmth:

A series of small rituals, those that are lived almost passively, just to be appreciate with time and age, or when they are lost, as during the 2020 pandemic.